Edit
watch 01:36
We're Getting Mutants in the MCU - The Loop
Do you like this video?
Play Sound

Dreamland was a location in the Interface universe. It was an amusement park where Mischief (at that time known as Percy) was employed as a clown before his transformation.

Dreamland was first introduced in Episode 14. Notable details about the park from this episode include the appearance of a Ferris wheel and the attraction "FOOLISH HOUSE", which is dedicated to Mischief.

Dreamland most recent appearance was in Episode 17. Notable details about the park from this episode include the existence of the Creation exhibit, a carousel, the central tower, and the park's destruction.

Dreamland is based off the real-life amusement park of the same name in Coney Island, New York, that was open from 1904 to 1911. It featured "classier" entertainment, often based on morality themes. The Interface version of Dreamland bears many resemblances to the real-life park, from the exhibits shown to its destruction.

The Interface rendition of the exhibit "Creation" can be seen in Episode 17 during Mischief's monologue.

Creation in the real-life Dreamland

The central tower of Dreamland can also be seen in the same episode. 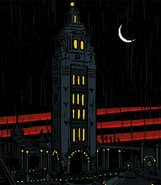 The central tower as it appears in Interface 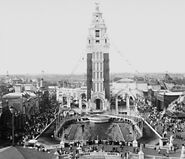 Both Dreamlands were destroyed by fire. However, there are some key differences as to the origin of the flames in each instance.

The real Dreamland was burned to the ground in 1911 as a result of a series of accidents during repairs to a ride called Hell Gate. In Interface, Dreamland is implied to have burned as either a result of a lightning strike from the ongoing storm shown in Episode 17, or had been set ablaze by Mischief.