Alive
Henryk Niebieski, or "Blue Guy" as he's sometimes referred to by fans, is a major character in the Interface series. Not much is known about him, other than his extraordinarily long lifespan. He is an important figure in the overlying plot of Interface, along with Mischief. He is the first character to appear in the series.

Henryk is established to be either immortal or possess an extraordinarily long lifespan, having witnessed his daughter die of old age while Henryk retains the appearance of a middle-aged man. His exact birthdate is unknown, but his birth year was confirmed in Episode 08 to be 1910. Assuming Interface takes place in the modern-day, this puts his age at about 110 years old.

In addition to his long lifespan, Henryk may be indestructible. He was seemingly completely unhurt by the car crash in Episode 20. It is unknown how Henryk attained these abilities, but it likely has something to do with cerebral electricity.

Henryk doesn’t speak throughout the entirety of the series, however as shown in other episodes, one could assume that he is capable of speech, but simply refuses to do so. The first occasion of him making any kind of oral noise was in Episode 13, when the car-form of Mischief that Henryk is riding in suddenly transforms into a unicycle. Henryk can also play the harmonica.

Little is known about Henryk's origins or birth. He is likely either a Polish immigrant or someone of Polish descent, due to his name having Polish origins. In addition, he can be seen making pierogies (a Polish dumpling) with his daughter in a flashback in Episode 16. Henryk was born in 1910 and attained his mysterious abilities sometime between then and 1945 (see the timeline of Interface). It is possible that his abilities came to him after the 1943 Philadelphia Experiment, which unleashed cerebral electricity upon the world.

He served in the armed forces during WWII, possibly in the air force (see Episode 16).

Henryk appears to be a smartly dressed middle-aged man wearing a blue suit, bowler hat, shirt, and tie. He wears an outfit similar to the man depicted in René Magritte's painting The Son of Man, of which an episode of Interface shares the same name. Henryk can often be seen smoking a cigarette.

Henryk's family is a great source of sadness in his life. His aging stopped apparently a very long time ago, and he has witnessed the death of his daughter by old age. In Episode 20, it is revealed that Henryk is inadvertently responsible for the deaths of his granddaughter and her spouse. His grief for his family is likely related to his selective muteness. Currently, his only surviving relation is his great-granddaughter, which he and Mischief set out to find in Episode 13.

René Magritte's The Son of Man

Henryk portrayed as The Son of Man

Closeup of Henryk from the bonus video "Big Smile's Order"

Closeup of Henryk from Episode 01

Henryk as he appears in Episode 22 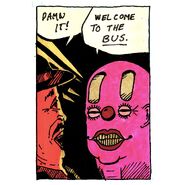 A noticeably more talkative Henryk, as he appeared in a 2009 comic by u m a m i