"I was like a little baby chicken, breaking through to explore the unknown. Leaving Earth behind, a shell of its former self." ― "Mischief"

The fourth episode of the Interface series titled 'Bear Witness', published on May 1st 2018 by 'u m a m i'. This episode directly continues from Interface Episode 05 and follows "Blue Guy" and "Mischief" in the Museum of Fine Arts located in Montreal.

The episode begins in the elevator leading to the higher levels of the Montreal Museum of Fine Arts. "Blue Guy" and "Mischief" emerge into a large room with a singular painting next to the elevator (see: Painting). An intercom/PA system announces that the museum will be closing shortly, casually interrupting Mischief throughout. They both inspect the painting and this causes Blue Guy to have flashbacks about his past life. Notable memories include his wife's funeral, the nuclear blast (see: Operation Tumbler-Snapper) and images of the ship's hull seen in Episode 01. Blue Guy's daughter (unnamed) speaks throughout the flashback questioning his mortality. The episode ends with Blue Guy on the floor and Mischief visibly distressed.

At the beginning of the episode in the elevator there is a hidden Morse code sequence. This can be translated to "NIPS" which is a reference to the Misc. video 'Tinky Winky's Tubby Time'.

It is believed, but not confirmed, that "Blue Guy" was the photographer responsible for taking pictures of the nuclear blasts generated in the "Tumbler-Snapper"[1] test series. In the video you can see Blue Guy being hit by the shock wave caused by the blast but remaining intact, further proving the theory of his invincibility.

The painting featured in this episode is titled 'Geopoliticus Child Watching the Birth of the New Man'[2] by Salvador Dalí, created in 1943. It acts as a metaphor showing how "Mischief" and possibly "Blue Guy" were breaking free of Earth and joining a "shell of its former self".

"Mischief" in his 'ball' form 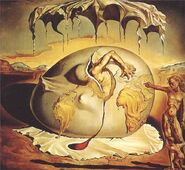 "Blue Guy" as seen with his wife and daughter

"Blue Guy" and his Rapatronic camera at the Nevada Test Site

​
Retrieved from "https://umami.fandom.com/wiki/Interface_Episode_06?oldid=466"
Community content is available under CC-BY-SA unless otherwise noted.