"Death has a face that takes... many forms." ― The ringmaster

The fourteenth episode of the Interface series was published by 'u m a m i' on July 6th, 2019. It features real-life amusement park Dreamland and part of Mischief's backstory. The ringmaster in this episode is voiced by The Minute Hour, who also co-wrote the episode. In this installment of the series, it is revealed that Mischief's name (or stage name) was Percy before his transformation.

This episode does not include a synopsis.

The episode begins with an overview shot of the amusemsent park. It then pans down to show a white brick building with a slightly different version of Mischief's face on it, with a sign reading 'FOOLISH HOUSE". The doors to the building open, revealing a trippy funhouse tunnel that engulfs the viewer. The ringmaster begins to make a speech about the face of death as the shot jumps to a human Mischief sitting in a chair, in reference to the 1862 painting Stańczyk by Jan Matejko. The shot cuts to a sunflower growing in a pot, evoking Mischief's disguise in Episode 05. As the ringmaster's speech continues, Mischief stares at the flower before it suddenly warps.

The scene changes to the interior of a circus tent. The ringmaster's speech grows in intensity as Mischief walks down a windowed hallway towards the entrance to the tent. As he walks, a sunflower can be seen replacing his reflection in one of the windows. The ringmaster reveals that Mischief is the face of death which he has been speaking about, and introduces Mischief as "The Incorporeal Clown... Percy!" The episode closes with Mischief commenting, "Percy? I thought we changed that".

Dreamland was a real-life amusement park in Coney Island, NY, that was open from 1904-1911. It featured 'classier' entertainment, often based on morality themes[1]. This would explain the heavy nature of the topic "the face of death" discussed in the ringmaster's speech.

The shot of Mischief in the chair is a reference to the 1862 painting Stańczyk by Jan Matejko. Stańczyk was a Polish court jester who lived circa 1480-1560 A.D.[2] He is often used as a symbol of patriotism and skeptical political wisdom. In the painting, he is depicted as the only person at a party troubled by bad news.

Mischief in reference to 'Stańczyk' by Jan Matejko 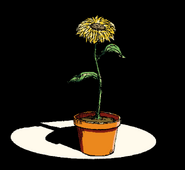 Mischief reflected as a sunflower