Previous Episode ←—→ No Next Episode

What came first, Henryk? The baby chicken, or the egg? Man... or God? Mischief

The twenty-fourth and final episode of the Interface series was published by 'u m a m i' on October 16th, 2021.

Will Henryk let go, or will he give in?

The beginning of the episode takes place during Episode 22. It opens with a video readout showing Mr. Greetings' slowing heartrate as he is administered a lethal cocktail of surgical drugs. The Mechanical Saccorhytus begins to separate around him and his heartrate flatlines. It is then revealed that he is in the chamber where KAMI's cerebral electricity synced with the Saccorhytus's brain in Episode 07; Greetings is shown hooked up to the machine by his eyes and mouth.

The episode skips forward to nighttime. Henryk is passed out on the floor of the lighthouse below the static-filled lantern. Nearby, on the console with the red button mentioned in the previous episode, Mischief has taken the form of an old rotary telephone that rings periodically. Through the window, a massive, gray pair of legs and hands can be seen. Mischief tells the unconscious Henryk that he was concerned about his obligations in the event that Henryk hadn't woken. He mentions it reminded him of when Henryk collapsed in the museum, during Episode 06.

A distorted view of space is shown, with stars first appearing as stretched pinpricks of multicolored light emanating from the center, before the vision stabilizes to show a field of stars. Mischief states that when humans first beheld the night sky, they saw a lung, a heart, a hand, and an altar. As the view zooms out, a constellation resembling Ara, the Altar, can be seen. He then asks what a constellation is, save for the sum of its parts, and goes on to say that humans didn't see stars; instead, they saw titans. The transformed Saccorhytus is then fully shown for the first time, towering over the lighthouse. It still bears the baby face of its blimp form, but now has a pair of arms and legs. Henryk wakes up and picks up Mischief's phone receiver. Mischief asks Henryk whether the chicken or the egg came first, and then repeats the question, asking the same of man and God. The Saccorhytus is then shown rubbing its eyes and smiling. Mischief says that should man come first, they will make a god, and will become one by doing so.

A brief flashback scene of Henryk in the Interface follows. As he boards the train, the winds pick up around his house, and a tornado begins to form in the clouds above. Back in the present time, Henryk holds a finger above the red button in the lighthouse. Mischief tells him that every choice he makes is a sacrifice. Henryk pulls his hand away and instead presses the red button next to it: Mischief's nose. Henryk's clothes turn pink as Mischief takes control of him, as he did in previous episodes. On the rocks below, Henryk's daughter and great-granddaughter look up, waiting for him.

The Saccorhytus bears down on the lighthouse as the Mischief-controlled Henryk makes his escape, running onto the beach as a green Ghost hand appears above them and attacks, punching the ground and narrowly missing Henryk. It carves a massive gash into the ground and shatters into cerebral electricity. The Saccorhytus grabs the lighthouse, ripping it from its foundations as Henryk watches, and holds it aloft like a bottle before drinking from the static-filled lantern. Mischief says that nothing will stop them, and thus Henryk never truly had a choice. The Saccorhytus becomes irate and violently throws the lighthouse into the ground. It breaks apart on impact and explodes into cerebral electricity.

Another pair of Ghost hands take form and fly toward Henryk, who jumps off a rocky ledge to avoid them. The hands slam into each other and are destroyed. Mischief continues, saying that if Henryk's choice was an illusion, then his sacrifice is as well. His daughter and great-granddaughter watch him from nearby. Henryk then vomits out Mischief in the form of a worm and his clothes return to their normal blue color. Mischief then transforms into an apple. Henryk's daughter warns him not to make "us" force his hand, and says he can still join them willingly and peacefully. She then commands his great-granddaughter to smile, asking if she is happy to see Henryk. Henryk holds the pink apple in front of his face (in a manner reminiscent of the "Son of Man" painting seen in Episode 05), and a shot of his house in the Interface is shown, breaking apart as the tornado gains strength. Henryk throws the apple at his daughter and it morphs into the shape of a human hand, and the fully-formed tornado carries pieces of Henryk's house aloft. As Mischief's hand approaches, Henryk's great-granddaughter runs away and the daughter drops the knife she had been holding to threaten the girl. The pink hand rips off the daughter's face, revealing it was KAMI's mask and dispelling the illusion.

Mischief's hand holds up KAMI's mask as another vision of falling stars is shown. Mischief says that the world looks no different to him when he sees through her eyes. Behind him, a blackened sun can be seen, and the scene then reverses to show the Earth at nighttime. Mischief says the mask only fits one way—one can look out, but not in. He then asks KAMI what she sees when she gazes at the night sky.

Mischief is shown draped over KAMI in his full elongated human form, wearing her mask on his face. KAMI summons the dropped knife and uses it to cleave the mask and Mischief's head in two; his skin briefly separates, revealing a static-covered human head with shifting faces. Mischief complains that after all this talk, he now has a splitting headache. A pair of cerebral electricity arms emerge from his forehead receptacles, reaching out toward the exposed static in KAMI's face. KAMI's systems are shown as her internal cerebral electricity is pulled away by Mischief. Acknowledging the threat, she initiates her "chaos destruct" function, causing the glass heart on her chestplate to shatter. In her failing systems, a hexadecimal message (see Notes section below) appears as Chef's knives spin around her head. KAMI violently explodes and lets loose a volley of knives, cutting Mischief's body into pieces.

Henryk, who had been watching from behind a rock, ducks as three knives slam into the rock face. His great-granddaughter tries to look but he protectively pushes her down. An overhead shot shows the aftermath of KAMI's destruction; Mischief's body parts are strewn about the area, and the place where KAMI stood has been reduced to a crater. Henryk and his great-granddaughter approach Mischief's severed head and Henryk attempts to take his pulse. Across the beach, the Saccorhytus cries. Henryk closes his eyes solemnly and places his bowler hat to cover Mischief's face. Suddenly, Mischief swallows the hat whole, declaring it musty and nutritious. His body then pulls itself back together and he transforms into an apple once again; this time far larger than before. He states that he is nutritious now.

The Saccorhytus spots the apple and runs toward it. Mischief warns Henryk and his great-granddaughter to leave before the hungry baby shows up. He asks Henryk if he remembers that "the strong eat the weak, and the strong do eat. Even parasites." The Saccorhytus runs over to Mischief and consumes him, chewing with a contented look on its face. However, its internal motors grow steadily quieter as it chews. Suddenly, it tips over, falling into the ocean. The smile vanishes from its face as it drifts around, before its eyes close as well.

Various shots of a city are shown, including a church, harbor, and intersection, all beneath a pink sky. Henryk and his daughter are seen eating at a Japanese diner as it snows outside. The credits then roll. Afterward, a final shot of the inert Saccorhytus is shown as seagulls circle around above it. 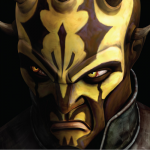